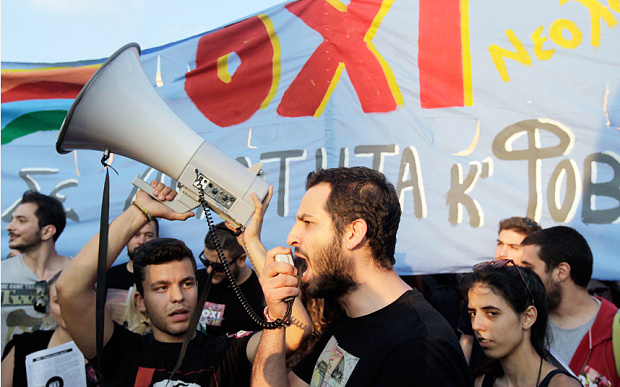 When there is a social crisis, the accelerating historical events will destroy some great names of the past, while it will highlight some others. This is the situation that is taking place in Greece. While the people such as Papandreou and Karamanlis who had once a great impact in the country’s politics were forgotten, others like Tsipras were declared as heroes in a short time. These new names who could not become the resolution to the social crisis can share the destiny of the old ones all of a sudden and lose their fame…

The economic crisis in Greece which was triggered by the great crisis of 2008 – which affected the World economy, especially central economies – has been affecting Greece since 2009 until now and surely will be effective for a long time in the future. It changed all elements of politics in Greece during these 6 years, and thus gave an opportunity to the revolutionists to change the course of history.
PASOK, one of the two important central parties of Greece, which never got a percentage of votes below 40% in the elections between 1980 and 2009, got 4.7% of the votes in the January 2015 elections and considered getting into the parliament as an achievement, while New Democracy got to be the second party with 27.8% of the votes. Their place was taken by Syriza, which was founded in 2004 and by its president Tsipras who got this position in 2008. Now, in the upcoming elections that will be held in the 20th of September, Syriza is expected to lose votes while other opposition parties in the left of Greece politics are promising to take its place.
Greece’s central parties which burdened the workers with paying the price of the crisis that started in 2009 lost most of their support. Syriza’s rise that started in 2012 was based upon the opposition against the austerity  imposed by the Troika (the group formed by the Eurpoean Commision, the European Central Bank and IMF) and Syriza marched to the power with this rhetoric. However they softened this rhetoric between 2012 and 2015, and in a convenient way with their reformist and pro-EU character: they started to tremble under the pressure from Troika, starting from their first months. Syriza took the bailout that Troika proposed during the loan negotiations to a public vote in June. However, even the support from the public and Greek workers who did not submit to the threats of the EU rulers by voting “no” with a 61% percentage was not enough; in the end, on 13th of July, Syriza surrended and signed an agreement including high amounts of increase in taxes on working class, mass privatizations, harsh cut downs, and it is even worse than the one New Democracy accepted.

This betrayal towards the worker class caused a chaos within Syriza as well. When the conditions of the agreement were being approved in the parliament about three quarters of MPs from Syriza (43 MPs) either declined or voted as noncommittal. Since Tsipras was only able to get the agreement approved with the help of other bourgeoisie parties’ support, his government’s majority in the parliament became a subject of question. Tsipras chose to resign on the 20th of August in order to compete in an early election; earlier than the effects of the austerity is felt more severely so that Syriza’s prestige is not too damaged to be chosen as the ruling party one more time. This is also in order to get rid of the opposition inside the party before the elections and not to give them the opportunity to prepare thoroughly. Syriza’s Left Platform that could not give up on staying within Syriza decided to establish Popular Unity Party upon the post-referendum betrayal. Popular Unity which was founded with the leadership of Panagiotis Lafazanis, the energy minister of Syriza administration, had 25 MPs from Syriza before they also got 53 members of Syriza’s Cenral Committee including Nikos Hundis, member of European Parliament. Another prominent members of the Left Platform, chairman of the parliament Zoi Konstantopulu also declared that he will be a candidate of the Popular Unity during the elections that will be held on the 20th of September.
Election polls already suggests that Popular Unity will be in parliament with around the 5% of the votes. The existence of Popular Unity has shifted balances for the radical left too. Popular Unity seems to be an obstacle in front of Syriza’s consistent opposition ANTARSYA’s potential of getting the protest votes, for now. The displeasure that will be created by Syriza will pave the way of success for Popular Unity who claims to be the follower of Syriza’s 2012 program. Actually, both with their leadership and with their program, Popular Unity does not claiming to be anything different than the Syriza before its declared betrayal: “Our policy is based on immediately stopping the debt repayments: we will negotiate for the cancellation of the greater part of the debt, but on that basis!… The conclusion we have drawn from the Syriza government’s experience – immediately being confronted with the blockade and the war unleashed by the European institutions – is that you have to show at least the same level of determination as they do. That is precisely where the Syriza government let itself down: it did not take any self-defense measures. That is the context for our proposed return to a national currency. This would also help us on the question of repaying the debt, because it puts us in a position of strength for making the creditors accept the cancellation of the greater part of the debt… We want to make a breakthrough, overturn the political landscape, and do fundamentally what Syriza had done between 2012 and 2015.” (Stathis Kouvelakis, former member of Syriza Central Committee)
The main project of the Popular Unity –which totters even with its “we are not repaying the loan” claim – is based on a resolution of crisis by exiting the Eurozone and returning back to Drachma. This project does not rise as the resolution of the laborers for the crisis; it is not based upon nationalizations under workers’ control, not completing the loan repayments, or expropriation of the banks.
ANTARSYA, the most important radical left unity to the left of Syriza, made a proposal to Popular Unity – because of the demand from within itself (Althusserian ARAN/ARAS) intended to join Popular Unity- based on the unity of action and some political principles against the new cut downs for a collaboration during elections. These principles consisted of the complete cancellation of the loan, nationalization of the banks under workers’ control and support for the workers’ struggle against the cut downs. However Popular Unity showed that their perspective is nothing more than a softened version of Syriza’s project by not accepting this offer. While Syriza started to resemble PASOK, Popular Unity is a candidate for being Syriza of the future. With this situation in hand, ANTARSYA decided to run for elections on its own. Meanwhile, ARAN/ARAS group decided to join Popular Unity as a logical result of their own position. On the other hand, despite the intensifying crisis and Syriza’s betrayal, KKE still cannot exceed their normal 6-7% limit because of their incurable sectarianism.

Perspective for the Upcoming Elections

As we mentioned earlier, an election lies ahead for Greece on the 20th of September. According to the polls, Syriza’s vote has retrieved from its 40% level in July to 27-28% level, because of their betrayal regarding the memorandum. This means that Syriza is face to face with the threat to lose its leadership to New Democracy.
Popular Unity is expected to get into the parliament with 5% of the votes. Radical left unity ANTARSYA, can now create a more convenient and effective political perspective with the separation of ARAN/ARAS. It does not seem possible for ANTARSYA to get to pass the 3% threshold with the shielding of the Popular Unity also in effect. However ANTARSYA’s real power is sourced from the streets. Even if the new administration gets to be formed by Syriza or New Democracy, strikes and protests will be fired up inevitably since they both will want to keep the cut downs. This is the real struggle area in which ANTARSYA is powerful. Greece has much more lying ahead of it. So with Tsipras out of the equation, more radical elements will become effective. That is why it was befitting for ANTARSYA to offer election collaboration to the Popular Unity with the basis of their own principles. However with their eyes upon the higher grounds of politics, Popular Unity considered excluding ANTARSYA, a potential headache for them, more appropriate. ANTARSYA should mobilize and strengthen the organization of their own power and their great circle in the upcoming period with mass protests and strikes by showing a massive energy.
The extraordinary situation in Greece presents the most suitable conditions for revolutionists with the legitimacy of the system completely shattered. The determinant will of course be the class struggle. In a case where the strikes and street protests are weak, the chance for Golden Dawn to make a breakthrough will increase. This situation burdens the revolutionist left of Greece with anti-fascist duties.