/ English / Reflections of The Mirror of Afrin- V.U. Arslan

Reflections of The Mirror of Afrin- V.U. Arslan 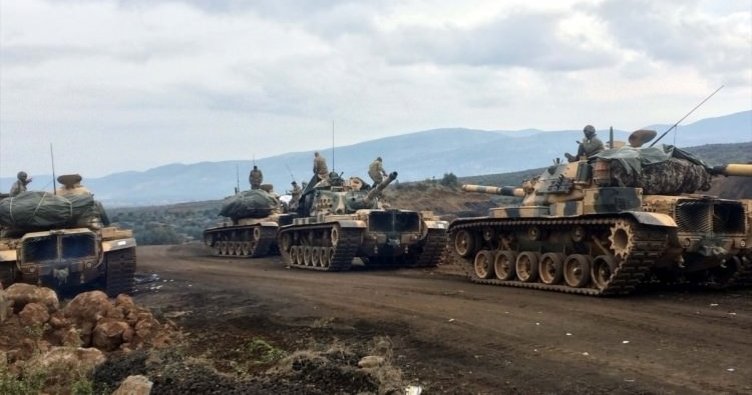 Recep Tayyip Erdogan (RTE) has seen Syria as a hunting ground since the crisis began in there. No one could stand before a victorious Erdogan. He could not find a better opportunity than “weakened Syria” to “resurrecting the Ottomans” and to take the positions “veteran” and “chief commander”. The fantasy of performing salaat in Umayyad Mosque in Damascus rooted from these desires. But nothing happened! Assad could survive with the support of his allies. RTE, who gets nothing from Assad, this time wanted to be a “veteran” by crushing the Kurds. It is a kind of being “veteran” that can be achieved by ruining the Kurdish houses by destroying Afrin, where tranquility is dominant, where the people who escaped from civil war live, and whose population is 800,000. Dictators who have been squashed throughout history have pursued nationalist wars and gaining glory and fame. Many of these adventures have been nothing more than accelerating collapse, apart from causing great suffering. We will see what the end of this adventure will look like.

The battle motivation created behind the front during wars is at least as decisive as the front. Although AKP is trying to silence the voices against the war by creating a great blockage in this regard, there are obvious natural limits to obtain this achievement. Once, around 20% of population in Turkey is made up of Kurdish people. Even though they cannot raise their voices due to intense pressure, most of this group is suffering a great deal for Afrin and they are angry at AKP and the other war likers. The emotional break with Kurds has reached the highest stage. Apart from that, there is a general negative atmosphere against the operation in the left-wing. Among the masses, there is also a widespread skepticism about the RTE’s use of the Afrin operation to make the one-man regime stronger. It is a historical fact that the political will that takes the initiative of war makes a great political breakthrough in the case of the victory of the war, and the political will have to pay a heavy price in case of defeat. We can say that because of this, the support given to Operation Afrin is less than it seems.

Afrin is a region where the majority of the society is Kurds. It is also a region that the support given to YPG is also historically the most common. It is inevitable that a great majority of Afrin’s indigenous people will have to abandon Afrin if Turkish Armed Forces (TAF) and Free Syrian Army (FSA) capture Afrin. It is not possible for the Kurds to survive in the same area with FSA and other jihadist mobs. Erdogan is also talking about sending back the refugees to Syria. In short, the alteration of the demographic structure of Afrin is on the agenda. Moreover, it is obvious that the TAF will try to be permanent in that region. It is aimed that a large area from Afrin to Idlib and then to the Euphrates as Turkey’s backyard and jihadist heaven. Negotiations with the US and Russia are relevant to this.

Putin is the great power that allows so called “Olive Branch Operation”. Of course there are a lot of interests for Putin from it. The disagreement of two NATO allies is an important development. Selling the S-400s to RTE, Putin compensates his Syrian costs. Apart from that, there are many energy pipeline contracts and nuclear power plant projects. Putin also wants to punish YPG because of being fully engaged in the US. As the situation progresses, YPG wishes to bargain with Assad. US has already discarded Afrin. There is not any serious opposition from neither the EU nor the United States. It is obvious that US does not want to burn the bridges with Turkey. Tillerson did not even use a translator during his week in Ankara. This was interpreted as a kind of secret agreement between US and Turkey that RTE left the East of the Euphrates to YPG and the US; in return he takes what he wants in Membic after Afrin.Asad knew that TAF would want to be permanent in Afrin, so Assad entered negotiations with YPG on military support. YPG is aware that it will not be able to stand against TAF and FSA if they are not supported. Assad rulership wants reauthorization in every square meter of Syria. On the other hand, it was alleged that Putin, who agreed with Erdogan, did not allow such a military operation. That is why units those are in Assad’s command’s entrance to Afrin remained symbolic. On the other hand, there are more than one external force that would want the TAF to get stuck in Afrin, which is the nature of imperialist relations. Assad’s power and Iran will continue to give limited but critical aid to YPG. The city war will be very bloody.

The Critical Mistake of YPG

The Kurds with the leadership of YPG gained the most profit in the civil war in Syria. YPG, which also gets very large areas outside of Rojava with US support, is shone like a star in the world press as they defeated ISIS on the field. US support has gradually turned into a full integration of YPG into US foreign policy. As the US use YPG (one alternative against this bloc which won in Iraq and strode in Syria greatly) against the Assad-Iran-Russian bloc, it has entered the RTE’s range. Assad and Putin has always considered YPG as a negotiable force; by giving autonomy etc. they have thought that war would not be a necessity. Nevertheless, as YPG nears the US in a way that makes Russia angry, it has become dispensable and finally conditions has been created that allows RTE to get what he wants. Likewise, thanks to YPG, the east of the Euphrates has been left for the US, the richest oilfield is Deyr Zor which is in Arabic region but YPG had obtained these fields before Assad and YPG had been unwilling to give these fields back. All of these led Putin to reach an agreement with RTE.

RTE has organised a single-man dictatorship in Turkey. Therefore, foreign policy is essential for enforcing suppression regime inside. AKP has a major responsibility at the bloodbath in Syria. This is an expansionist, sectarian and extremely-nationalist policy. This aggression is totally incompatible with the interests of laborers in Turkey. They should raise their voice against the oppression of the Kurdish laborer brothers and sisters and they should not be fooled by chauvinist propaganda. We socialist revolutionists are strongly opposed to such an adventure. Turkey’s foreign policy should keep their hands off Syria and must accept the vested rights of the Kurdish people.

No to ethnic and sectarian strangling!

Imperialists get out of Middle East!

Long live the brotherhood of peoples!