/ English / The Covid-19 Threat Is In Gaza: The Zionist Blockade Must End Immediately! – Emre Güntekin

The Covid-19 Threat Is In Gaza: The Zionist Blockade Must End Immediately! – Emre Güntekin 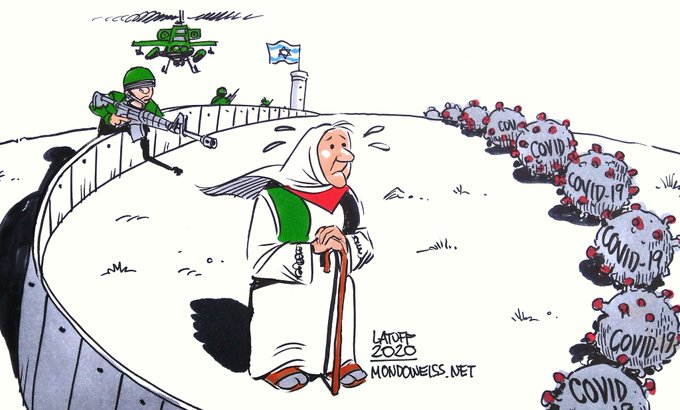 We all witness how the embargo imposed by the Western imperialist on Iran in the leadership of the US aggravate Covid-19 outbreak. Recently, the ISL called for lifting the sanctions against Iran.

Covid-19 was detected in two people, who returned from Pakistan, on March 21 in Gaza, which is under blockade by land and sea by Israel after since Hamas tookover the control in 2007. Three quarantine centers were established in the country and Gazans who came from outside of Gaza are put in quarantine.

On the other hand, it is stated by Israel that all entrance to the Gaza Strip and the West Bank are prohibited. While healthcare workers and healthcare-related transitions are excluded from the ban, Palestinian officials said that it is quite difficult to obtain permission even for health service and humanitarian aid and they have to wait for a long time because of security.

Due to the sanctions applied by the Israel and Egypt for years, Health system in Gaza is struggling great difficulties. Palestinians face with difficulties about providing many medical equipment and health supplies are and recording new cases raise fear. Abdelnasser Soboh, Director of the Gaza Office of the World Health Organization, stated that there are 62 respiratory units in the region and only 15 of them are available, while the region will urgently need 50-100 respiratory units. He also stressed that the country’s health system capacity can only handle 100 patients.

On the other hand, due to the infrastructure destroyed by Israeli military attacks in Gaza in the past, people have serious difficulties in providing clean water and electricity. In Gaza, where the population density is the highest in the world but the infrastructure is still insufficient, the dimensions that the epidemic can reach are already creating anxiety. According to the report of The UN the number of Palestinian refugees relying on it for food aid in Gaza increased from less than 80,000 in 2000 to about 1m in 2018. As a result, 80% of Gaza’s population have become dependent on.

Israel recently restricted crossing of 7,000 Palestinians workers who work in Israeli territory, especially for Gaza. However, they impose these restrictions not to protect the Palestinians live in Gaza but to prevent the epidemic worsen in Israel and at the same time, to avoid the burden and the responsibility of a possible epidemic and destruction it will cause. As a matter of fact, a possible humanitarian disaster would turn the attention of the world to Palestine and cause questioning of Israel’s inhuman blockade. The office of COGAT (Coordinator of Government Activities in the Territories) head Kamil Abu Rokon announced , “Viruses and illnesses have no borders — therefore, it is in Israel’s best interests to prevent the spread of the coronavirus in the Gaza Strip and its outbreak in the territories of Judea and Samaria. This is in Israel’s interests because such an outbreak may well endanger the health of the residents of State of Israel as well.”

A comment in the Haaretz notes that the Covid-19 outbreak caused an unofficial ceasefire between Israel and Palestinian forces. But it is obvious that silencing weapons is not enough to stop the epidemic and a humanitarian disaster
Urgently, It is necessary to lift the inhuman blockade in Gaza to get access the health supplies and equipment, cleaning and hygienic products, clean water, and any materials needed to restore the infrastructure of the region that has collapsed due to military attacks. If this is not done, the murderer Israeli state and its imperialist collaborators will be responsible for the casualties due to Covid-19.