/ English / Why was it not succeeded , what is the solution? – V.U.Arslan

Why was it not succeeded , what is the solution? – V.U.Arslan

Turkey has gone through many election periods in which the ones who received 51% took everything; the ones who remained at 49% drew a blank. While the government took what he wanted with all the state facilities, his army of proponent media, oppression and his vicious politics way, the opposition has been absolutely defeated by staying under the half in total again.

However, the hopes that the presidential elections would be at least the second round were quite high. Muharrem İnce’s populist-center rhetoric and energetic performance had excited millions who were looking for a way out hopefully. In case of an open and massive fraud during the elections, millions were ready to go out on the streets. However, when the counting of the polls in the regions was followed, it was seen that AKP and MHP were showing strong resistance even in places where they are weak. The resistance was so clear that Muharrem İnce fell behind of Erdogan even in his hometwon. Someone from your own village becomes a presidential candidate, and, he is a challenging candidate, but more than half of the village does not vote for him. This is a striking indication of how Erdogan’s polarizing tactics, which he has been pursuing for many years, have created solidification. As Erdogan hold on places where he was weak, in additon to the places where Erdogan took massive votes, the result shaped. İnce and CHP administration had to accept the results.

How should the Results be Construed?

In total, the anti-AKP opposition could not pass beyond referendum of 16 April 2017. Even in the referendum, there was a 1% decline in the number of AKP members who did not vote “yes” which is also became visible in this elections.

It has been turned out that the excitement created by Muharrem İnce did not affect the AKP sole. The votes on the NO side of the referendum have shifted to one opponent party to another opponent party. Thus, a decline in the votes of AKP did not happen. The polarization of identity-culture, which has also left its mark on the past elections, continues its effects. Electoral realignments are eminently limited. It became clear that the AKP and the MHP had a very effective manoeuvre in choosing to go on an election before the upcoming crisis hit the the economy. Thanks to this, it has paved the way for AKP and RTE to consolidate the support of its own mass.

The election results are not the final exit before the dark tunnel at all. It is obvious that we must hold firm on this rocky road. On the other hand, we should have enough historical background to know that the fates of the countries are not assigned to the polls. This country presents its resistance sources in spite of stiff chauvinist breeze and mounting pressure. AKP side also clearly sees these dynamics as it is. The question is what we will do.

AKP’s  Base is the Poor

AKP receives intense support from the large and small employer circles, artisans, peasants, and the urban poor. Among these, the most crowded group is the urban poor. As it is the case in every election, AKP’s ballots are reaching the peak as moving towards the poor districts. When you go from Çankaya to Sincan and Altındağ; reach to Tuzla and Pendik from Kadiköy, RTE makes a burst of votes. Nothing is going to change without changing that picture. How will the masses of workers be rescued from AKP? This is the key part of the question. At this point, those who accept in advance that the political attitudes of the urban poor are unchanged, citing the influence of religion and prayer converted social aids, are pumping despair into the air but they are badly mistaken. Millions of young workers among the urban poor are going to undergo a transformation when a political alternative which can touch their lives and activate their class reactions.

In this regard, there are two political alternatives to reach the masses of workers who are AKP base. The first one is the shift to center that Kemak Kılıçdaroğlu and İnce are heading. In other words, being flirtatious with everyone, “I embrace everyone!” style. This is a style taking the cultural codes as a reference and they hope to win votes from the right votes. That is to say, the statements “I also go to mosque every Friday”, “I have been to umrah”, “My sisters are also turbaned”…etc. combines with the promises starting to flutter around in election time. However, the experience is obvious. The effort to address AKP base by shifting to the centre does not work and it does not soften ossification.

Without sharpening the political discourse and without executing the necessity of that discourse in worker districts and neighbourhoods, a good future cannot be expected. The young and poor labourers in AKP base cannot see a systematic difference between AKP and CHP. They are rightful in this issue, after all. Therefore, the more the class conflict cannot dominate the agenda; the more Afrin, martyrs, Kandil, terror, external outbreaks, TV series like Diriliş Ertuğrul, Muslim world are put in place. In that way, Erdogan’s front can keep the poor labourers on their side and strengthen the polarization of identity and culture. 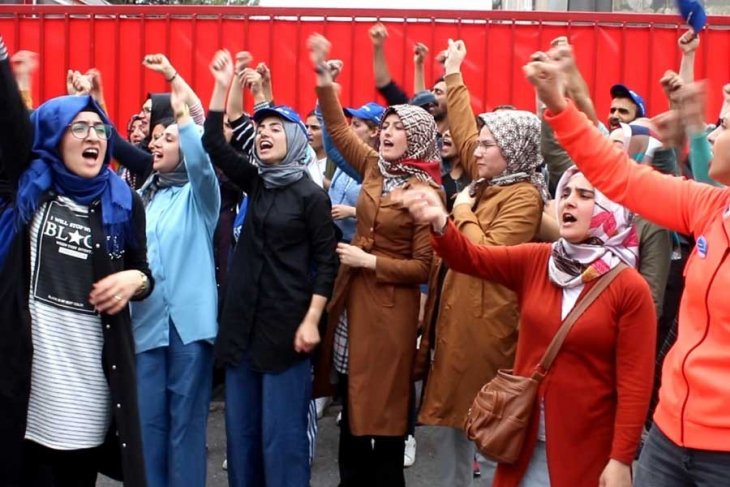 We Need a Worker Spring!

The only thing that will work is a new policy of try to achieve a fundamental change in the political divisions of Turkey. There is no alternative to labour radicalism to dissolve cultural polarisations. I mean, we need much more than “Demirel-like discourse” which repeats “our workers, our peasants”. This is discourse and practice of class conflict. For example, with the sayings “TÜPRAŞ which is sold niggardly will be taken back and those who privatized will be judged” or asking for an progressive tax system. The change of trade union laws, the elimination of trade union gangs and the creation of real labour organizations… For this demonds, not only the time of the election in the worker regions but working day and night … Proletarian discourse does not any make sense without remarking the other side, that is, or without putting local and foreign patrons and imperialism on the target board. The class is a relation, a conflicting relationship if we say it even more clearly. In this respect, it is necessary to show an enemy to the labourers. Conflict and contradiction create movement and transform the masses. But it has to be us to determine the agenda of the conflict before the Erdogan. As you remember, Turgut Ozal and ANAP were overthrown with slogans: “The fatin Çankaya is the enemy of the worker “.

It will be possible with such a policy to get rid of the AKP dictatorship. With the election campaigns held in every 4-5 years or with the understanding of parliamentarian centralism… AKP does not come to an end with these. We need a non-systematic politics which is to be determined with class radicalism, and an organized and stubborn work spreading to us all the time is necessary. People transform in action and struggle. They even transform very fast. Flormar workers, whose majority is religious women, showed this truth very clearly. So, we need a Worker Spring. We cannot expect that from the CHP, which is bound to bosses and imperialist capitalism. We cannot expect this from HDP too. Without taking our place in the organized socialist struggle, we will not be able to have a way out.

What a great power it would be sprang if the excitement of young and dynamic people who are enthusiastic about Muharrem İnce were on the right direction. The gate of big changes will be opened if they choose an active and organized struggle far less than this large group of hundreds or even millions. That is why we socialists must work with all our power to be able to present ourselves as an alternative.