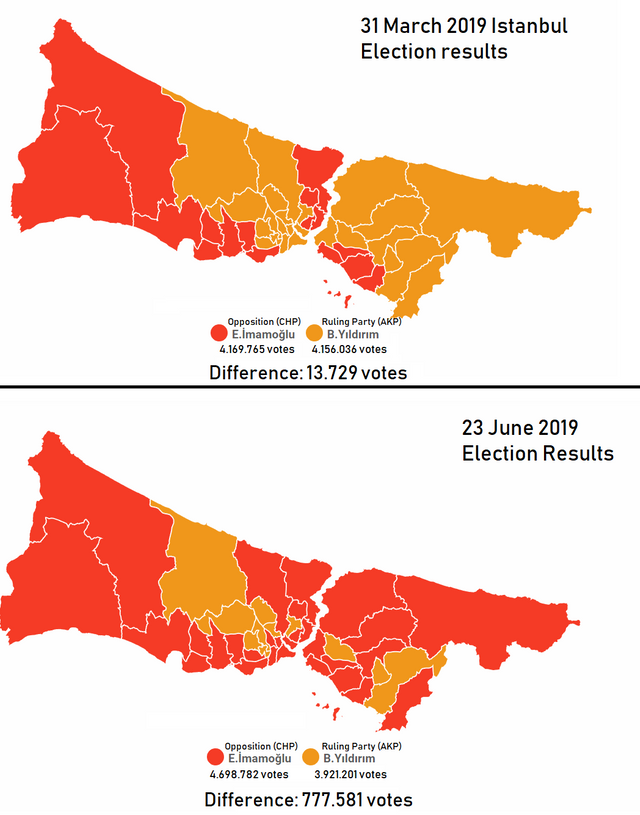 AKP and  (Recep Tayyip Erdoğan) RTE cancelled the March 31st Istanbul Metropolitan Municipality elections, ordered a re-election and fell into the well he dug himself.  After this expensive gambling, AKP experienced the biggest election defeat in its history. When the results are examined, it is seen that a large proportion of voters left AKP in working class districts. At a time when the economic crisis caused a significant decline in the living standards of the laborers,  AKP and its partisan capitalists exceeded the limits with their elite lifes, arrogance and corruption.

The 31 March elections were a disaster for the AKP itself, and it was seen that there were considerable shifts from the AKP in the working districts of the big cities. In addition, pro-HDP Kurdish laborers supported Imamoglu. However, the results of June 23 elections showed that approximately 300-350 thousand voters in Istanbul broke away from the AKP in these two and a half months. In this process, AKP’s despotism ,humiliating  discourse and the tactics of slander caused a backlash. During the election campaign , the only tactic of AKP was to labelling all opposition as terrorist  but after Erdoğan realized that he would lose the election, in a last-minute effort to gain Kurdish support, Erdoğan tried to activate Öcalan by publishing  his appeal on the media . The reaction of people and the youth to this rotten methods is visible in the election results.

The youth who stuck between the terrible working conditions and graduate unemployment, refuses a life is ruined by the regime that built on interests of handful people It is evident that youth is increasingly disgusted with the corruption materialized with AKP. The youth’s expectations about future contradicts with the country that AKP tries to building favor of its partisan interests that the youth does not accept this anymore.

We, the revolutionary socialists are happy with the political changes of the masses. However, the working class and the youth should not have surreal expectations. To put it directly, the revolutionary awakening of the working people is the only way to make “everything great.” The CHP has no problems with the brutal capitalism so, CHP, İmamoğlu and their companions cannot make difference. For example, AKP will take action to make the people pay the bill of the economic crisis, and probably will knock the door of the IMF to save the bosses. CHP has no different program other than this.

From now on, the capitalist system is in search for normalization with or without AKP.  We can say that various political and bourgeois elements will intensify their effort in this direction. Nevertheless, the working class should not accept a normalization in favor of the bourgeoisie, but should combine the class struggle to get rid of the AKP with a wider perspective of class demands. A bourgeois liberal normalization will not be a cure for the laborers. As long as the capitalism rules the laborers’ suffering will not end. Moreover, in a society full of such contradictions, the bourgeois-democratic “normalization” will always be on a knife-edge.

On the other hand, early comments claiming an end for AKP do not reflect the facts. Currently, all the ropes in the power mechanisms are in Erdoğan’s hands. The AKP’s losses in municipalities would be compensated by a reduction in powers of the mayors and transferring them to the municipal councils.  AKP will try to use every opportunity to hold onto power in the forthcoming period as there will be no ordinary elections in the agenda for four years, under. It is not difficult to predict how dirty tactics they will resort to.

We are at a time when social opposition improves the morale. While defending democratic rights, we are faced with the task of expanding a class-centered revolutionary struggle against the AKP. It is a fact that the workers and the youth can turn to socialists around the independent class attitude. Because the interest of tens of millions; a better life and future requires the strengthening of the socialist struggle. The Socialist Laborers’ Party (SEP) calls on all workers and the youth to fight under the banner of socialism in order to expand this struggle.