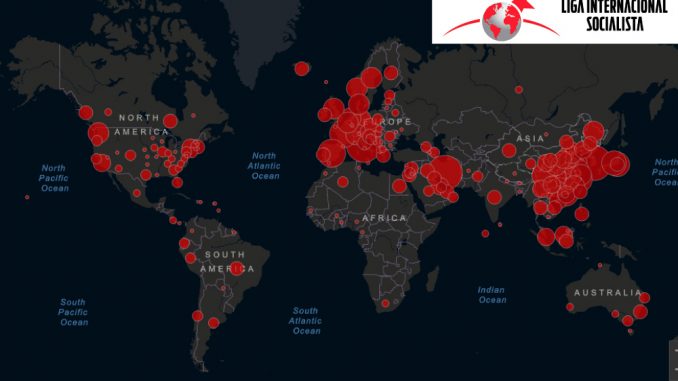 We are living a global crisis that has been triggered by the coronavirus. The pandemic has provoked the outburst of an economic crisis that had been preparing like a perfect storm and has revealed the consequences of austerity policies, growing inequality and the degradation of the public health system and public services. Governments responded with repressive measures that have not yet been able to stop the spread of the virus while enabling extraordinary profits for capitalists.

The number of people infected with coronavirus already exceeds 145 thousand in 139 countries with more than 5400 deaths recorded. The World Health Organization has classified the outbreak as a pandemic. Not only do we suffer the consequences of the virus and disease, but also of capitalism, the real culprit behind the pandemic.

The data on Covid-19 is alarming. Although exact information is still not available, its death rate is around 3% and it rises rapidly for those over 60 and people with pre-existing medical conditions. It is twice as contagious as the seasonal flu and it takes about five days to develop symptoms. Barriers and quarantines of millions have not yet been able to stop its expansion. Some specialists claim that it can potentially infect up to 40% of the world’s population.

Austerity and the crisis of healthcare

The pandemic exposed the collapse of healthcare systems exhausted by the capitalist logic of profit, privatization and austerity. Under these conditions they were not prepared to confront the virus. Despite the progress of treatments, vaccines, antibiotics and retrovirals that substantially reduced epidemic mortality during the 20th century, the debacle of the capitalist system, budget cuts in healthcare, poverty and environmental disaster – all aggravated by a lack of information and prevention – turn the recommendations of the World Health Organization into a dead letter.

Three factors have combined to put the population in a state of vulnerability.

First, drastic cutbacks in public social investment as part of the programs of structural adjustment fostered for many years by capitalist governments, the European troika, the IMF, the World Bank and the WTO. These policies of social austerity have degraded the infrastructure of health services and workers’ and popular gains such as social wages, labor stability, social welfare, etc. that have been targeted by austerity due to the ongoing capitalist crisis.

Second, the introduction of ever rising healthcare fees and the privatization of the system. This was recommended by the same agencies as austerity and endorsed in recent years by WHO itself.

Third, the increasing cutbacks on public investment in science, technology and research.  States give priority to the defense of the financial interests of pharmaceutical corporations and the industrial medical complex, at the cost of leaving millions of people without treatment for emerging diseases.

The failure of governments to curb the pandemic

The response of the world’s governments bears witness to their failure, and the system’s inability, to safeguard the health of the people. From China’s bureaucracy that hid information and deployed the full strength of its repressive apparatus to try to minimize the crisis, to Trump’s anti-scientific denialism and xenophobic rhetoric that presents the virus as a foreign danger. Other governments cover up state inaction by transferring responsibility to the working people. All of this, within the framework of decades of austerity and privatization of health, caused valuable time to be wasted to contain the virus and mitigate its impact.

Faced with the reality of the pandemic governments are now reinforcing repressive policies and capitalists’ profits. Trump has transformed the pandemic into fertile ground for big business by privatizing the response. He has put billions in the pockets of big pharma for the development of tests and vaccines, and, has even agreed with giant retail companies, such as Wall Mart, for quick diagnostic centers to be set up in their parking lots. In addition, Covid – 19 was used to justify the injection $1.5 trillion into financial markets through the FED.

While capitalists make profits with the help of governments, the peoples of the world are being quarantined. Authoritarian measures, that aim more at repressive social containment of the crisis than preventive social distancing, are growing. Governments are more interested in containing the popular response to their austerity policies than in containing the virus. In the Spanish State the PSOE – Podemos government has decreed a “State of Alarm”, which grants special powers that include the mobilization of the army, the intervention of the Autonomous Regions and the trimming of democratic freedoms. In France Macron bans concentrations of more than 100 people on the street and suppresses protests using public health as an excuse, as he moves forward with pension reform. In New York, they have already used the National Guard to ensure quarantine of a particularly affected community, and the state governor has asked the federal government to mobilize the army. In Chile Piñera seeks to declare a State of Emergency, taking advantage of the health crisis to enforce social control measures that seek to contain a mobilization process that has not stopped in 5 months. We must stand against every measure that, invoking the virus, seek to curtail democratic freedoms to clear the path for austerity plans.

The pandemic aggravates an economic situation that was already advancing at a steady pace towards a general crisis. Even without the former, all the elements of a crisis were coming together, and its outburst was just a matter of time. Its roots lie in the very dynamics of the capitalist system in general, and in the policies adopted after the 2008 crisis in particular. The latter had already demonstrated the structural trend towards falling rates of profit and, consequently, the overaccumulation of capital that led to the formation of a financial bubble that eventually burst.

Since then, states have been injecting money to capitalists through massive bailouts, tax cuts, quantitative easing, lowering central bank interest rates, etc.  Unsurprisingly, however, the rich used this money to become richer, and in the face of modest prospects for profit in productive activity, they turned massively to speculation. This gave rise to a spectacular financial bubble whose burst coincided with the spread of coronavirus.

Markets were eager to sell and waiting for signal, the pandemic sounded the alarm. This caused a spectacular drop in stock markets around the world. Billions of dollars in interventions by Central Banks and interest rate cuts have failed to stop the collapse so far.

Governments use coronavirus to justify this massive bailout of capitalists. In turn, the development of the pandemic fuels the economic crisis. The paralysis of productive sectors and entire industries such as tourism and the decline of international trade hit the world economy with a contraction of both supply and demand. The bourgeoisie also takes the opportunity to mount an offensive against workers by firing or licensing without full pay and cutting wages and benefits. Temporary and precarious workers are the first to lose their jobs and income.

The fight for a working class and popular response to this crisis needs to be promoted. As immediate demands in the face of the emergency, we first need a shock of public health investment with specific budget allocations under social control. It is necessary to ensure that all tests, treatments and vaccinations are completely free for all. To do this, all the supplies and infrastructure to combat the pandemic must be declared of public utility subject to expropriation. We must demand free distribution of elements of prevention and treatment. In addition, all the installed capacity of private health services should be made available to the public system. We must fight to guarantee full payed sick and family leave, full wages for all quarantined workers and the prohibition of layoffs. Social wage for informal, self-employed and unemployed workers. Prohibition of evictions and immediate housing solutions for the homeless. End all persecution of migrants, no deportations and full access to the health system. Immediate recruitment, with full labor rights, of all personnel necessary for the health system and reversing any austerity measure. We must put an end to profiteering from healthcare by replacing the private system with a single payer national healthcare system under democratic control of its workers and users. Not one more dollar to Wall Street and speculators, nationalization of banking and the financial system. No payment and investigation of external debts. Down with all the flexibilization reforms of labor and retirement. It is time to put the resources to ensure the health of peoples, not for the IMF and capitalist corporations.