/ English / In Iran Every Possibility Is on the Agenda– V.U. Arslan

In Iran Every Possibility Is on the Agenda– V.U. Arslan 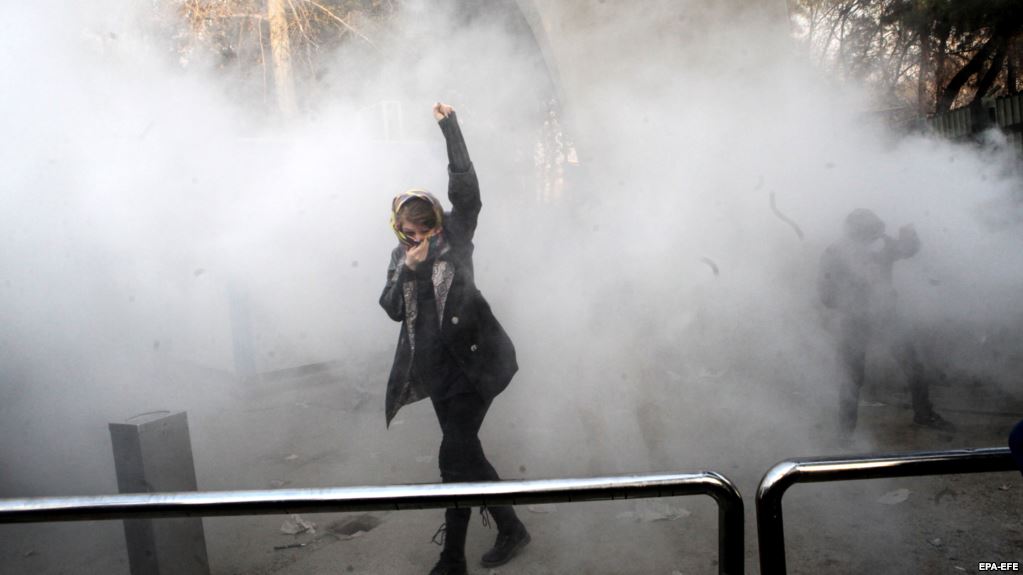 In Iran, the state of affairs continue to deteriorate from the point of Mullahs. Financial bottleneck will deepen thoroughly with new sanctions from the USA. While at the beginning of the year a dollar was 43000 Riyal, today, it has risen to 95400 Riyal. The workers have already been weighed down by the cost of living, unemployment and economic stagnation. As conditions gradually become heavier, the possibilities of a military coup, a collapse of the regime or a major social explosion seem to be talked about. Even if it is early for these possibilities, the further deterioration of the living conditions can change the course of events.

It is well known that Iran has come to a boil. Capitalist Mullahs are also aware of the fact that they are on a volcano ready to explode. However, they are not to be able to do anything. They do not have a tangible plan other than to hang on to the power, slaughtering and scaring the protesting people as a narrow interest group. They do not know what to do.

The Embargo is Deepening

While the situation is in a bind to such an extent, the USA is making the final preparations for “an unprecedented financial pressure”. US officials are occupied in “warning” the international companies about not to trade with Iran or otherwise they are going to face sanctions. Indeed, a committee from the U.S. Treasury Department conveyed their “warnings” via meeting with TOBB (The Union of Chambers and Commodity Exchanges of Turkey ) member businesspersons in Ankara. In this case, we can expect that the economic crises in Iran to become intensified even more. In addition, the scolding from Iran about closing the Strait of Hurmuz brings the possibility of a hot contact to the agenda. However, it is not so easy for Iran to do that. Even China declared being against of that. It is obvious that the Mullahs in Tehran will have a great difficulty to free themselves from this grip. On the other hand, it is quite difficult for the regime to turn the USA press into a kind of “national” union, because people’s lives have gone through holy war calls against the external enemies for 40 years. After that time, it is rather difficult for the regime to convince the Iranian people that the war is their own. 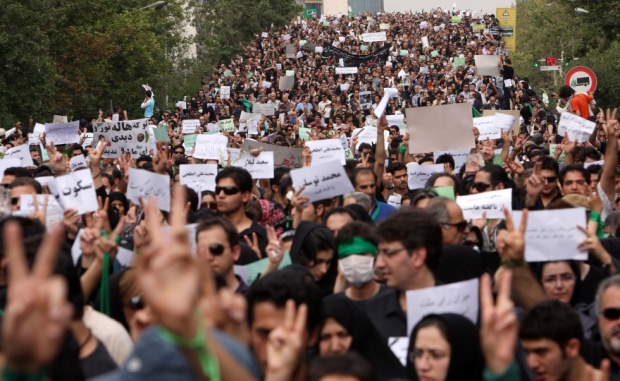 The anti-regime protest movement in 2009 was expression of the accumulation of anti-system energy within the educated middle classes, the university youth, and the organized labour class that was not very strong. These fractions hates Islamic regime. Epicentre of the protests in 2009 was the southern regions of the capital Tehran, which were economically better. The Kurdish, Azerbaijani and Arabs had interpreted the actions as Persians’ own issue and called for not to participate in the actions in their own regions, saying “We do not have blood to shed for Persians!” After all, Mullah regime didn’t hesitate to show harshness and open fire on the protesters. In the weeks following the elections in June 2009, the masses held massive actions, according to the official sources 36, as for the opposition sources 72 people lost their lives. 4000 people were taken into custody, many activists were subjected to torture in custody, and some of women and men arrestees were raped.

When it came to the end of June, the masses started to recede from the streets. The leaders of the Green Movement (Musavi and Kerrubi), who were the bourgeois leadership of the movement and came out of the Islamic regime, were arrested and are still being kept a close watch on house arrest. The socialist groups that had begun to develop in the moderate Hatemi period before Ahmedinejad received overwhelming blows in oppressive atmosphere. Thousands of opponents including socialists had to flee from Iran. The movement had been quashed in this way. 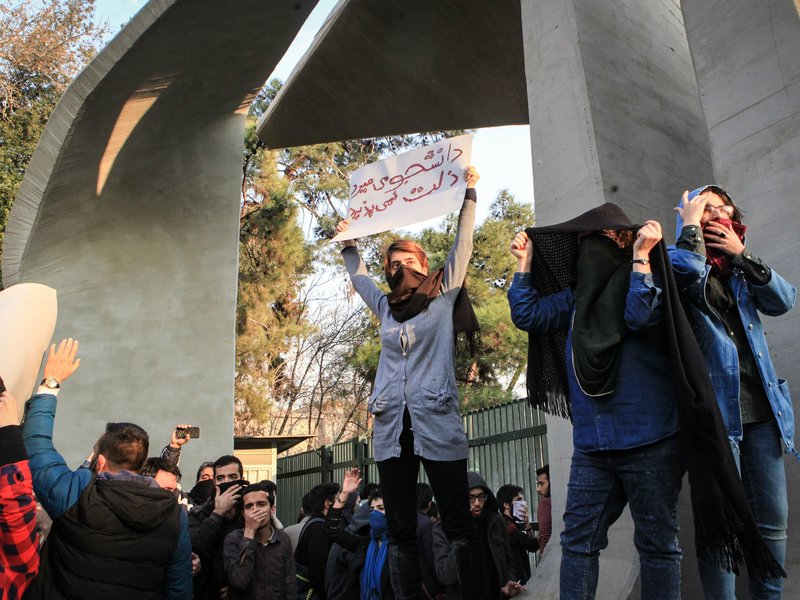 The protests, between 28 December 2017 and 7 January 2018, was representing a dynamism along with the working classes’ taking to the streets with their economic demands. Alongside the poor regions where had been sustenance of the regime, the industrial basins and the conservative rural cities were leading the way in events. What was more that the workers who went out on the streets passed to a revolutionary position by raising anti-regime slogans. There could be no better proof that the regime’s social base was resolving. The harshness of the protests in Ahvaz, where is the border area which the Arabs live in, can be interpreted as a sign that this time ethnic minorities will not be on the back burner with a nationalist perspective and that the class reflexes can turn people on the streets. The actions again were quelled strictly. In total, 25 activists lost their lives. 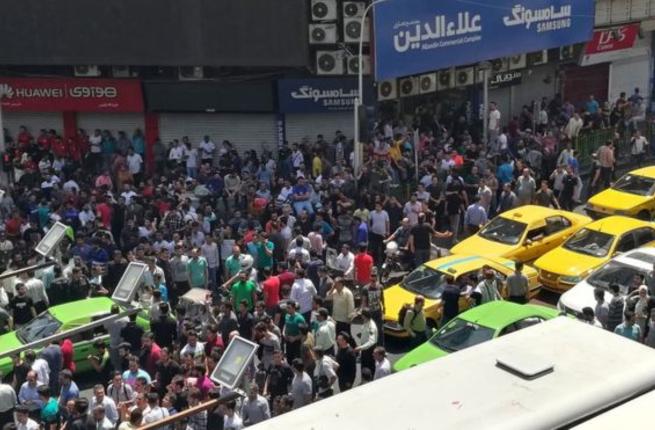 The Islamic regime is entirely at a loose end. The economic situation is terrible. Corruption and poverty are rampant; the system is corrupted from the roots. When people cannot do shopping because of the expensiveness, the tradesmen crashed. As a result, tradesmen’s protests started to hit the regime. The epicentre of the actions of 25-30 June 2018 was Bazaar, where was Tehran’s tradesmen heartland. The irony of the history, the greatest support base of Khomeini in process of 1979 was the tradesmen of Bazaar. Now, they are also screaming the slogan of “death to/enough to regime”. When it comes to poor laborers and tradesmen, regime have to be much more careful about its statements and harshness it applies. Although tradesmen protests have calmed down for now, none of the problems has been resolved yet. Laborers and tradesmen are ready to take the action at the first occasion. 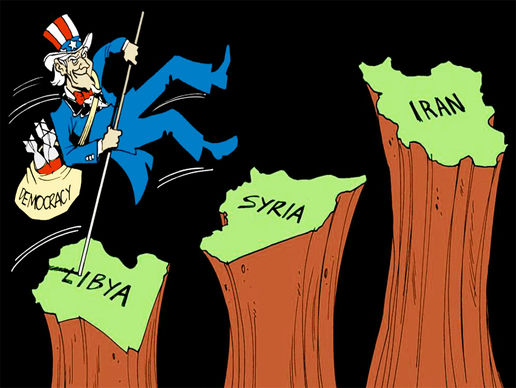 Fears of the People

The Iranian regime can successfully play its game by playing Shiite card in the environment of the Middle East’s ethnic and sectarian conflicts. Of course, these are costly jobs. Besides, Iran is in a financial bottleneck for a long time. Because the people are suffering from poverty and oppression the issues of Palestine, Assad, Lebanon, Yemen etc. that are very useful to manipulate the anger of the massed are now far from creating sympathy.

At the occasion of a sudden collapse of the regime, the possibility of Iran’s conversion to Syria and Afghanistan frightens the people. The fact that alternatives of the Mullahs have not presented an alternative program and the opponents (even those in exile) cannot present a well-coordinated and organized are making the future ambiguous day by day. The possibility of national movements’ taking the actions and starting of ethnic conflicts in Kurdish, Azeri, Arab and Beluchi regions is not a possibility to disregard. There is no doubt that the enormous energy sources in Iran whet the imperialist powers’ appetite. We are talking about a regime that tries its best against Israel and Saudi Arabia in the Middle East and becomes an ally of Russia against the USA. Everyone knows that the imperialist powers are waiting for a suitable opportunity to circle like vultures above Iran, which is in this situation. In short, the fears of people are not groundless.

Even if the socialists in exile are disjointed, there are some political alternatives. The most outstanding one among these alternatives is Shahism. The Pro-Shahs who are waiting for their turn around son of the last Shah who died in exile, Rıza Pehlevi, have centred the USA. This group endowed with a great economic power, seeks to establish a pro-Western constitutional monarchy. Although it is not possible for pro-Shahs to organize within Iran, it seems possible for Pehlevi to find support in new Iran. Majority of people are so fed up with Islamists that people who regard the period of Shah as nostalgia of good old days are not much few. People of Iran will always lean towards the possibility of leading a consistent transition. The proponents of secular Shah administration who will receive support from the USA and the West are making the assessment of this situation.

The People’s Mujahedin of Iran

The other organized opposition group is People’s Mujahedin of Iran. PM (People’s Mujahedin) has undergone a lot of transformation in time while once had an identity of Muslim socialist guerrilla organization that organized military attacks on Shah and USA targets before 1979. People’s Mujahedin, whom Khomeini was afraid of that they might be a rival for him and attacked, could not escape being crushed even if they tried to resist for a while. The more PM was suppressed in Iran, the more it became a subcontractor of Saddam in inimical neighbor country Iraq. This subcontracting caused the organization to lose its popularity in Iran. Having fallen into a quite difficult situation after Saddam’s overthrow, PM tried its best to build bridges with USA, to get out of the list of terrorist organizations and succeeded. People’s Mujahedin is also waiting for the regime in Iran to be overthrown. The organization, which does not have a mass base in Iran, relies on its strength in abroad who are closemindedly tight-knit to it. As one of the most organized organizations, they will try to take advantage of the gap, however, towards the organization there is deep lack of confidence in Iran. Additionally, for the active great part of the people who are fed up with religiosity People’s Mujahideen, whose religious side is strong, do not seem attractive at all.

Neither those who want to bring back Shah regime nor the People’s Mujahedin can be an alternative for Iranian laborers and the youth. Therefore, the role of the socialist organizations will be distinctive for the Iranian people which has a reliable leftist grassroots. For this, the left-wing exiled groups firstly must make the people in Iran feel their existence thereby coming together. In this case, they will not have difficulty in finding a considerable follower mass in Iran. Namely, if bourgeoisie and the imperialists are getting ready for a possible sudden change in Iran,  the revolutionary socialists should do the same. For that, they must, firstly, come together leaving the strict battles among themselves, be consistent and be productive. In this way, within the people of Iran, they will be able to take attention of the masses of the left and, in time, will be able to gain their trust.