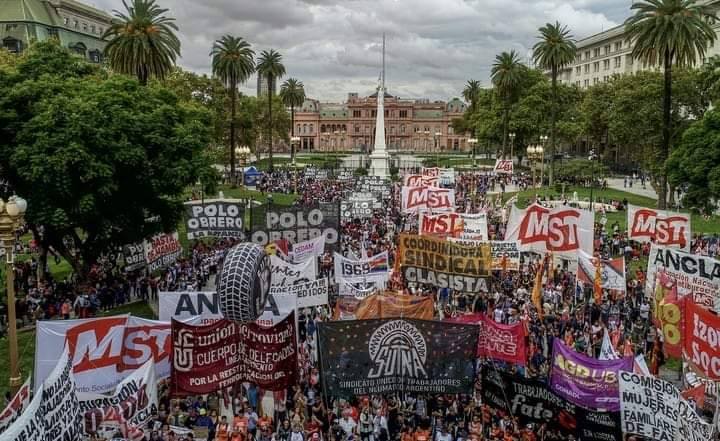 The year 2019 marks the intensifying of the war between workers and capitalist all around the world: the uprisings in North Africa, the rising class struggles in France, Iran, Argentine and US and the movement of the masses towards the left. The ones who claims that the class struggle is over has always been talking nonsense, yet the real dynamics of life has punched them in the face.

In Sudan and Algeria, the people has raised against the dictators and still running the riot. The masses have overthrown the dictators, but the dictatorships stay in their places. The counter revolution prowl to do its bloody moves in these two critical countries. Worker masses must realize the class base of these dictatorships. In other words, class against class perspective must strengthen. Without the fall of bourgeoisie dictatorships, it will not be possible for the workers of these countries to see a bright future. Not only in Sudan and Algeria, but also in Morocco and Tunisia, the class struggle is on the edge of boiling point.

The social fabric of North Africa is not fully covered with ethnic and sectarian scars that capitalists are able to make it gangrene. The interaction with Europe is high. There is a huge gap between what the workers and youth expect from life and what the system can provide to them. Therefore, there is an accumulation of class anger against decayed dictatorships and this reveal itself as strong actions in appropriate conditions. In the center country, Egypt, unfortunately it seems like it will suffer for a long time because of the dictator Sisi who took the power after the Tahrir revolution which couldn’t be led to socialist line and therefore was defeated. However, it is certain that the uprising is coming slowly. The duration of this process will be determined by the movements of worker in other countries.

Sisi has scared like hell because of the yellow vest movement in France. He didn’t hide his fear. He forbade the yellow vest sales. The yellow vest has inspired not only Egypt but also all the world. In France, because of the active sabotage of trade union bureaucracy, the protest movement that the yellow vest started, could not trigger the strike wave of the organized working-class movement. If this happened, not only Macron will be kicked out, but also the capitalist system in France would be shook like hell. It did not happen but still many rights have been gained in favor of workers and in the meantime in so called the cradle of democracy West Europe, the European bourgeoisie can raise the level of police terror when it is “necessary”. The Yellow Vest movement unmasked not only the trade union bureaucracy but also the left parties of France that is integrated into the system. Therefore, the need for the revolutionary content of socialist left policy has shown up.

Sisi was terrified because of the yellow vest movement in France. He didn’t even hide his fear. He forbade the yellow vest sales. The yellow vest movement has inspired not only Egypt but also the world. In France, the protest movement that the yellow vest started could not trigger the strike wave of the organized working-class movement because of the active sabotage of trade union bureaucracy. If this was to happen, not only Macron would be kicked out, but also the capitalist system in France would tremble like an aspen leaf. This scenario did not happen but still many rights have been gained in favor of workers. In the meantime, it became clear as light that the European bourgeoisie in West Europe, the center of so-called the cradle of democracy, can raise the level of police terror incredibly when it is “necessary”. The Yellow Vest movement unmasked not only the trade union bureaucracy but also the left parties of France that is integrated into the system. Therefore, the need for the revolutionary content of socialist left policy has manifested itself.

As it is seen, the rise of class struggle shows itself not only in the peripheral countries but also in the imperialist metropols. One of them is US which is the epicenter of world imperialism. In that country, the teachers, the automotive industry workers, the fast food workers and in many other sectors there have been effective demonstrations and strikes. Moreover, the class demands are being raised around USA with the leftist reformist Bernie Sanders. Socialism (even though mostly used in the reformist content) strongly pulls the progressive workers and youth towards itself with an extreme power. Let’s keep in mind that the tendencies in center countries influence all of the world and follow them closely.

In Latin America, Argentine is the leading figure. There is a huge economic crisis in the country. System is fragile. On the one hand, the workers try not to lose their jobs in the economic crisis, on the other hand, they challenge the attacks of the right-wing government. The revolutionary Marxist parties such as our sister party MST are massive. There might be chances for big opportunities. Therefore, there are many responsibilities for revolutionary Marxist parties and organizations.

In the neighbor country Iran, the worker class is on the edge of boiling point as well. the tyranny of Islamist regime is in charge to protect what they stole from the people. However, the workers and the youth detest the Islamist capitalism. The people are confused about the risk of ethnic and religious slaughter after the fall of Molla regime. In this very point, in Iran where the base is still leftist and the revolutionary tradition is alive, it is very important the rise of revolutionary alternative.

If we try to write about every country in detail we can not finish this article. Yet, I will complete this article by undermining 3 things for sure:
Imperialist capitalism is fragile, and the class struggle is very high in specific countries. What all the working class of the world need is a success story. A revolutionary breakthrough can lead a strong revolutionary tendency all arould the world.

SEP puts its efforts actively to such attempts, and focuses on this task to fill the gap in international level. In this sense, The International Congress in Barcelona which consist of revolutionary marxist organizations from many countries is a significant step onward. We will continue to broadcast the progress of this international unity.