/ English / HDP, Parliament and the Socialists-V. U. Arslan

HDP, Parliament and the Socialists-V. U. Arslan 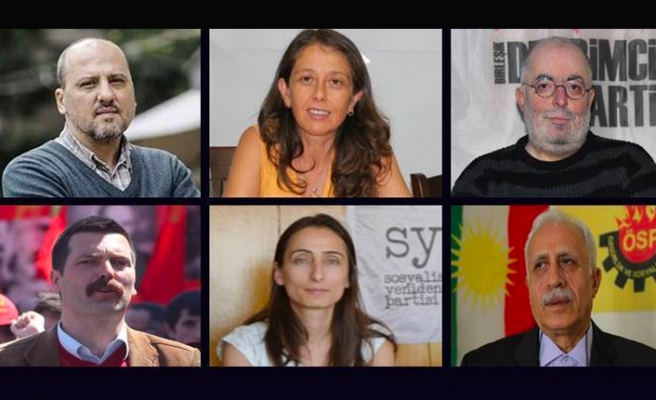 HDP has made a great splash with becoming deputy candidate of left-socialist “stars” such as Erkan Baş, Ahmet Şık, Oya Ersoy, Veli Saçılık and Barış Atay from HDP. Names from leading organizations like Halkevleri,SMF,ESP,DP, TİP, ÖSP and SYKP have found a place in HDP’s MP lists. Naturally, this is seen as a justification of self-praise for HDP and the natural ground of socialists is presented as HDP. All in all, HDP hegemony among socialist left has reached peak again during this election.

It is obvious that HDP attracted socialist organisations under the circumstances that socialist organisations lose power . On the other hand, it is somewhat necessary to question the perception of “the natural ground of socialists is HDP”. Think of it this way: famous names from socialist left (such as Ertuğrul Kürkçü, Figen Yüksekdağ, Levent Tüzel, Rıdvan Turan, Saruhan Oluç, Ufuk Uras) had also become deputies in the past parliamentary periods. Well then, what had been or hadn’t been done in this quite period of their deputy experiences? In other words, to talk about the relationship between HDP and the socialists, we need to talk about what differences the “socialist” MP’s in the parliament created.

To cut a long story short, it is quite impossible to claim that these socialist MPs made a difference for the sake of socialism. Of course, in that point it is also important what is understood by socialism. When we call socialism, what we mention is class struggle, labor radicalism, antagonism with bosses, anti-capitalism, anti-imperialism, internationalism. Now, when we define socialism with this Marxist perspective, we face the reality that the past socialist representatives haven’t made their presence felt neither in parliament not in the field. The socialist representatives fluctuated after the periodically fluctuating strategy of Kurdish national movement, and meanwhile politically dissolved in HDP, their organizations have lost power.

HDP is not only dominant because of its power. It is the basic determinant of the political perspective and it is ideologic center. “Radical democracy” that HDP adopts is the compass of the party. The place where radical democracy, which is shaped by the rejection of the class struggle and the strategy of the workers’ power, will be nothing further than liberal pluralism and world status quo. Moreover, the practice performed during all those years is obvious. When this the situation, would it be possible for the revolutionary socialists to join to HDP?

The groups, which had been independent from HDP until now are in HDP as they are not assertive about improve their own political dynamics, wanted to take part in high politics with the opportunities that HDP offered. By doing this, they have to adapt to the ideological-political line of HDP. This is how it works.

Also, HDP is not give socialists opportunity to be a MP for the sake of charity. Famous socialist figures provide HDP with a large hegemony area on the left, provide greater legitimacy and prestige. And, this is not something can be measured with votes.

Well, cannot the new socialist representatives change how the things works in HDP? Of course, the personal idiosyncrasy can be taken into consideration. For example, Erkan Baş can be more militant and charismatic than Levent Tüzel, but the main issue will not change. If you are not elected to the parliament with your own power, struggle and the excitement that you created, you cannot make a difference when you go to the parliament. For instance, in the 1960s, 15 representatives from TİP were able to create a great reflection because they were there as the voice of the class movement upon which they ascended. There were their own organization, the masses’ sympathies and hopes behind them. But today, if you are chosen with the power of Kurdish national movement, you will inevitably have to confront the workers in parallel with the HDP and with the agendas it sets. For example, even if you call yourself as “Marxist-Leninist-Communist”, you will have to host the president of TUSİAD (Turkish Industry & Bussiness Association- organisation of capitalists in Turkey) and will prate about “fruitful negotiations”.

In short, does this follow from the place of the revolutionary socialists is not HDP? Yes, we need to tell the issue with this clarity. We have ended up in prison, faced prosecutions because we are opposed to the oppression of the Kurdish people. We are revolutionary internationalists, we will not refrain from our behavior against oppression, but we also know that the socialists must protect their political independence and create their own dynamics.

For that, we have been striving to create a common struggle front of socialists since the state of emergency. We have also made efforts to make the common candidate of socialists Mayor of Ovacık, Maçoğlu. In all these processes, especially TİP and General Chairman Erkan Baş had an important position. Things could be shaped much differently, but they have shown that they lack the energy, will and political clarity to prefer and alternative socialist project which is class oriented, active in the streets.

After all, HDP is a party which we always in solidarity. In this current situation, we have also called critical vote for HDP in the elections. But, adopting HDP’s leadership is something else. Because there can be no bright future waiting for us without overcoming the identity-culture polarization of which HDP is already a part. Turkey will be another country when the time the socialists becomes the playmakers, rather than being materials for showcases. We need a struggle wave strengthening the unity of the workers and the brotherhood of the laborers. Our red color must be on the field and continue to become stronger.

Today, there is still the possibility for the socialists to create their own dynamics with a new composition on the socialist left. However, it is important that non-sectarian socialist forces come together in order to give an active struggle, do labor-centered politics and are willing to struggle commonly,. The task of the revolutionary Marxists is to fight along this route.